A Brief History of the Carthage Public Library (Written circa 2009, needs an update!)

As early as 1870, the citizens of Carthage began a movement to organize a permanent public library for their community. Lecture courses and public entertainment were used to raise funds for a library service that opened in a store front on the 600 block of Main Street. This first establishment loaned books to patrons for an initiation fee of two dollars plus ten cents per week.

In 1902, philanthropist Andrew Carnegie offered $25,000 to build a public library if the citizens would vote a tax to support a library and if the city could provide a suitable location for a building. Even though they did not have the right to vote, women of the community circulated petitions for a supporting tax. The vote to initiate a library tax carried 831 to 94.

The corner lot at 612 S. Garrison Avenue was chosen as the building site. The building, constructed of Carthage marble, was built in a neoclassic style that was popular between 1900 and 1920. Frederick Gunn was the architect. With 5,000 books on the shelf, the library opened on February 2, 1905 and was one of three Carnegie libraries in Jasper County. There were 324 borrower cards issued at that time. The first book circulated was Ben Hur and was issued to patron Nicholas Wolff who was a telegraph operator at the Frisco Station. The first director of the Carthage Public Library was Miss Elizabeth Wales who later became Secretary of the Missouri Library Commission in Jefferson City, Missouri.

In 1986, the Library Annex was donated by Precious Moments creator Sam Butcher. Located at 510 S. Garrison, the building provides office space and a community room with a small kitchenette.

The E.L. Dale Memorial Garden is located just north of the library building. Through funds from the Steadley Trust and the Helen S. Boylan Foundation, a botanical garden with a Memorial Fountain, a statue commemorating former Carthage Press editor E.L. Dale, and an Alice in Wonderland children’s area enhance the grounds surrounding the library.

Augustine Birrell once said that “Libraries are not made; they grow.” The Carthage Public Library has certainly grown since 1905. It now houses a collection of over 48,000 volumes, and offers videos, books on tape, large print books, a CD collection, children’s reading programs, internet, genealogy, and interlibrary loan services, and is supported by an active Friends of the Library group. Other features of the library include original art work by Jerry Ellis, Lowell Davis, Bob Tommey, and Barbara Ivey, an unique low dome with stained glass, and a miniature doll and toy collection.

On November 4, 2003, voters approved a 3/16¢ Parks and Stormwater Sales Tax to fund $2.5 million of a $4.5 million library addition and renovation project. The remaining $2 million was raised with private donations.

Ground was broken for the construction of the new addition on February 6, 2006, the library’s 101st anniversary. The architectural firm Gould Evans designed the building, and R.E. Smith Construction was the general contractor for the project. The 13,000 square foot addition opened on May 29, 2007, and the renovation of the original building was completed in February 2008.

Quick Links: Your Library At Home

Missouri State Librarian Robin Westphal made a visit to our new Steadley Family Legacy Center. Her tour included spending time with the Administrator Ben Young as he showed her all of the tools and manipulatives our patrons can take advantage of with their library card. She was very impressed and excited for our community. 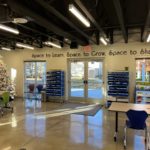 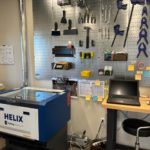 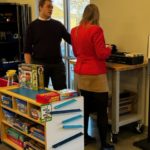 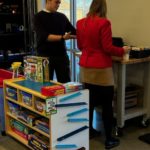